The band’s use of gauzy layers of distortion and motorik/ostinato rhythms draws comparisons to My Bloody Valentine and Neu! To my ear, there’s something about the southern roots of this trio that lends muscle and sinew to the spun-glass textures associated with dream pop and shoegaze. But don’t take it from me — Wray has caught the ears of critics at the New York Times and Wall Street Journal (paywall).

The percussion in Wray’s songs leans inexorably forward without disrupting the ethereal mood. The resulting ambience reminds me of a time-lapse video where city night lights, viewed from above, take on the appearance of electronic circuitry or perhaps some complex organism, its arteries pulsing.

Afterward, David B. and Blake answered some questions by email. Topics include: visual effects used at shows, road snacks, and favorite books. (Spoiler alert: Blake names After Dark as a fave. I love Murakami and I think Wray’s music complements the Japanese novelist’s semi-lucid dreamscapes with their unresolved contradictions.)

I asked them the silliest question I’ve ever posed to a band: Which astrophysicist would prevail in an arm-wrestling tournament? Their answers are sublime. The interview & Wray’s upcoming tour dates are after the jump.

I’ll start off with an easy(ish) one. What’s the genesis of the band name? I read in an interview that it comes from an asteroid name. Or are there multiple origin stories? Do one or all of you have a particular passion for space/science?

David B: There are, in fact, multiple origin stories.  I remember it took us months to nail down a name. We liked the word RAY as in a luminous stream. The W is harder to answer, but at some point we felt that it fit. I have an amateur interest in the cosmos and love my monthly subscription to National Geographic.

Blake: When you have three people choosing anything, let alone a band name, it can get a bit complicated, sometimes exhausting. Once the three of us found a name that didn’t warrant one to three scoffs, we were sold.

I love the video projections you used at the show. Can you tell me about how you developed that? David B. mentioned last night that some of it is found/archival footage, and it sounded like some of it is original art influenced by Japanese “floating ink” painting.

David B: Blake has spent time editing first-wave computer animation footage over the last few years. We think that works well washing over us live. Recently I contributed a video that I created employing suminagashi, a Japanese paper marbling technique. We have also started digging into ethereal footage from cult films, editing them / slowing them down, leaving less of or no narrative. We want people to get lost in abstraction during our live performance.

Blake: I came across a bunch of John and James Whitney animation videos via a Youtube wormhole and thought it fit what we were doing as a live band at the time. Something that would help create a mood and encourage immersion with both audio/visual. We’ve been using pretty much the initial versions I edited for around two years now. We’re working on having the projections on a screen behind us rather than washing over us. It’ll allow us to use more film footage, but without losing abstract ideas. It’ll also open up more lighting techniques for the rest of the stage…more work, but hopefully more interesting.

The video created by Dawn Carol Garcia for “Hypatia” is really intriguing. How did the concept come about — did you send over the song and let Dawn run with it, or did you have this idea in mind of a History Channel/dream sequence montage?

David B: I love that video! Dawn had agreed to work with us and had a technical concept of facial projection. She also had a loose narrative about an ending relationship. With help from our friend Andrea Paschal, we suggested that the video focus around Hypatia, the historical figure. She ran with that but also came up with this history channel sort of sexual fantasy. The scenario that plays out is actually strikingly similar to my lyrical inspiration and scientific interests.

You worked with Lynn Bridges and Daniel Farris in producing/mixing the new record. Why did you reach out to them (have you worked with them before?), and what was that process like?

David B: Daniel Farris engineered and mixed our first record. It was our first time to work with Lynn Bridges. Lynn is an out-of-the-box thinker so he brought a lot of ideas and ended up co-producing the album with us. We mixed the record with Daniel. He really gets our sound and how to execute all of our interests. Overall, the Hypatia process was painstaking, exhausting, intriguing, and rewarding.

Blake: It was a much longer process than we had anticipated. Coming off the first album, we were doing a fair amount of touring, so the recording process was constantly being split among our various schedules. But because our label [Communicating Vessels] owns its own studio, we did have the access and freedom to explore a bit more on this album. There wasn’t an initial rush to push out another release as soon as possible. We’ve already begun discussing writing/recording for our next output. We’re trying to think of different ways to do both write and record. Up until now it has been the same for both LPs. We’re talking about doing one-off singles, 7”s, working with different engineers, producers, etc. Changing up the process.

What bands/albums are you listening to these days?

David B: I have been digging deep into Prefab Sprout’s album Jordan: The Comeback with all of its pop perfection. [Also]: Iron Curtain’s Desertion; The Durutti Column; F. R. David; Roman á Clef; The Radio Dept. (always).

Tour life: Who has driving duty, and how do you pass time on the road — e.g., does someone DJ, do you have favorite podcasts?

David B: Blake and I switch up driving. David S. navigates. We are pretty quiet and are generally doing our own things. We all like different music; we have some favorite artists in common. Radiolab is the podcast I listen to most often, it’s great!

Blake: I really enjoy the Comedy Bang Bang podcast, but when I need to do a long haul, it’s usually going to be something beat driven and instrumental — The Field is perfect for prolonged gazes into the paved abyss.

David B: There is usually beef jerky in the van…shameful. I’m gonna say banana.

David B: I’m currently reading Critical Path by Buckminster Fuller and I’m not going to lie…it’s a tough read. I’m probably only retaining 60% but it’s a great and informative essay for anyone interested in our future as human beings. [For those unfamiliar with Fuller, I recommend this New Yorker piece.] 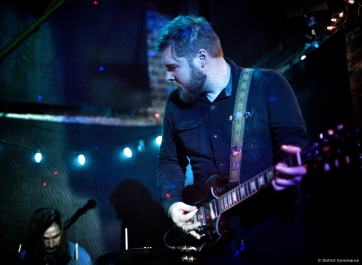 Blake: Haruki Murakami puts me in a mood (in the best way). I really enjoyed After Dark. I’ve recently started Ancillary Justice by Ann Leckie. It’s the first book in her Imperial Radch space opera trilogy. It’s an undertaking for sure, but her writing makes it easy to fall into her world. I’ve always loved that about science fiction…the immediate immersion into the creator’s vast imagination. Languages, planets, worlds, races, technologies, all made up (or plucked from the future) and thrown at you from the beginning. It gives the reader no chance to escape. You just have to jump in and figure it out…live in their world for a bit.

David B: Two tire blowouts within an hour was pretty memorable. Also, we once did a donut/banana swap with the Man Or Astroman? [Alabama surf-rock] guys while driving down the interstate. That moment is documented on our Instagram.

Finally, if your band name is inspired by an asteroid name, I have to ask: Who would you bet on in an arm-wrestling match — Carl Sagan or Neil DeGrasse Tyson? (Please assume for purposes of this hypothetical that Sagan is still alive.)

David B: I feel like answering this question could cause the universe to implode but here it goes: Carl Sagan all the way, however, I’m certain Stephen Hawking could destroy them both with brain power.

A heartfelt thank-you to these fellows for taking the time in the middle of tour to pen such thoughtful responses. Note: The embedded links in the responses are mine.

To read more about their time on the road with Man or Astroman? and performing with the Alabama Symphony Orchestra, check out this interview.

Pick up a copy of Hypatia here. Wray’s upcoming tour dates are: