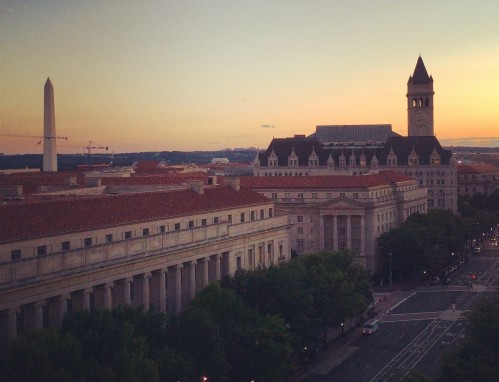 It’s summer in D.C. The heat radiates off the sidewalks. Your morning runs might as well take place in a sauna. And your World Cup bracket is in shambles. Happily, live music cures most ailments, so here are a few suggestions.

If you’re a fan of indie folk singer-songwriters like Gregory Alan Isakov, check out this Fayetteville duo this Friday — they’ll be making a stop in the D.C. area on their way to the Red Wings Roots Festival in Mount Solon, Virginia. I’ve been to a Stone Room show before (Vandaveer was amazing) — you haven’t really experienced live music til you’ve been in a cozy house concert setting. Take a listen to “Will and Woody.”

July 13: Hamilton Leithauser (of the Walkmen) @ The Hamilton (Washington, DC)

Remember the Walkmen? The sardonic “We’ve Been Had,” the maelstrom that is “The Rat?” That band was, to me, the epitome of New York City and indie rock. The Walkmen disbanded in late 2013, but its members have stayed busy. Last month, frontman Hamilton Leithauser released his debut solo album, recorded with collaborators from Vampire Weekend, the Shins, and Fleet Foxes. Mix two parts cool moodiness, one part grit, one part pop, and a dash of vulnerability. Shake, strain over ice. Enjoy. The Hamilton is a chilled-out, classy venue — perfect for this kind of music. Get your tickets here.

I was wowed by this alt-country fireball when she opened for the Old 97s last month (pics and writeup here). If you haven’t seen her before, you won’t get a much better introduction than at Ram’s Head On Stage. It’s an intimate venue and there’s not a bad seat in the house.

South Rail’s sophomore album, “Stars,” showcases the band’s alluring mix of sass and sensuality, from uptempo original “Be That Way Again” to a lovely, lonesome cover of “Wayfaring Stranger.” I’ve written about this band before, describing their sound as Neil Young meets Wilco meets Eva Cassidy (and maybe Lucinda Williams, too). South Rail is a fixture on the local Americana scene, and for good reason. And if good music isn’t incentive enough, Republic has darn good cocktails. (I’m partial to The Localist, which is made with Green Hat Gin, honey, and a summery splash of citrus. Listen local and drink local!)

If you’re a fan of early Wilco, Kings of Leon, or the Avett Brothers, you need to listen to this Ozarks roots rock band. Ha Ha Tonka (named after a state park) will be playing on H Street later this month (tickets here). The Missouri boys are as adept with powerful electric guitar riffs as with pensive bluegrassy harmonies. Stay tuned for a write-up of “Lessons,” their excellent new album.