Music can be powerfully evocative. When Oliver Wood sings about ice cream melting in the sun and a traveling troubadour in whose tunes you hear “a little Chicago, and a lot of New Orleans,” it takes me back to afternoons lounging on the back porch, watching the sun set over the bayou.

Well, that’s an imagined nostalgia — I grew up in the suburbs and never lived in a home with a porch. But the Wood Brothers’ music, rooted in the sounds and symbols of Americana, creates a sense of belonging, of sharing in a timeless story. Over the course of four albums, the band explores blues, country, gospel, and funk, with lyrics that are sometimes mischievous and other times philosophical.

Real-life brothers Oliver and Chris Wood grew up in Colorado with their molecular biologist dad and poet mom. From there, the brothers’ paths diverged. Oliver went to Atlanta and played in Tinsley Ellis’s touring act before forming his own group, King Johnson. Chris headed to the New England Conservatory of Music where he honed his skills on the bass, and then moved to New York City, forming the jazz trio Medeski Martin & Wood (check out Snake Anthony). After pursuing separate music careers for fifteen years, the brothers performed together at a show in North Carolina, and the rest is history.

The Wood Brothers are often referred to as an Americana and blues band, but their music defies neat categorization. The songs fuse various musical traditions, drawing from the blues they grew up listening to (including Lightnin’ Hopkins), classic country, folk, and jazz (traditional and contemporary). The result is both familiar and fresh. If you like the Avett Brothers and the Devil Makes Three, you should give this band a try. Oliver Wood’s captivating vocal style — slightly gravelly, a discernible twang — is complemented by Chris Wood’s virtuosic, note-bending bass playing. The high lonesome harmonies in their latest album are particularly compelling.

My favorites across the albums include the reggae-inflected “Angel,” the funky, tongue-in-cheek “Shoofly Pie,” and the slowed-down, simple “Sweet Maria,” with its three-part harmonies. But what first got me hooked was the debut album’s “One More Day,” an updated New Orleans boogie combined with lyrics that come straight from a humble heart.

Well I seen you in the sadness, I seen you when you’d hope to die, I heard you say, well it’s raining all over the world / What did I tell you, what did I say / Just when your faith is gone, give it one more day.

The Wood Brothers recently performed to a sold-out crowd at the Hamilton in Washington, DC. Thirty minutes after doors, the line to get inside still stretched down the city block. Once inside the multi-level venue, a quick scan of the crowd revealed the band’s cross-generational appeal.

After a solo set by Philly-based Mutlu, Chris appeared briefly on stage to set down a couple of props, including a vinyl album cover of Little Walter (the blues singer and harmonica player). A while later, Oliver and Chris took the stage, accompanied by multi-instrumentalist Jano Rix. The crowd clapped, an excited woman yelled out “I love you!” and then an anticipatory hush fell across the room before the band launched into “Neon Tombstones,” off their excellent new album (you can and should purchase The Muse here). 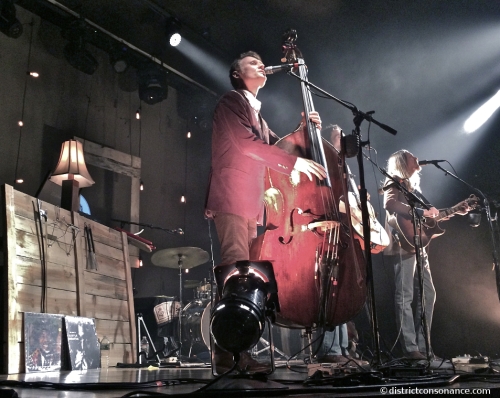 The Hamilton fits 450, yet the set felt more intimate than that. People danced; some cheered at the opening notes to favorites like “Postcards from Hell,” and “Luckiest Man.” Chris showed off his moves during “One More Day,” setting down the bass and dancing across the stage to appreciative whoops from the audience. For the encore, the crowd was treated to a cover of Michael Jackson’s P.Y.T. (Pretty Young Thing).

The Wood Brothers are just so darn good at capturing vignettes of life and conveying them in a way that seems familiar and universal. These shared stories are important, and nostalgia serves a purpose. A concert is both an individual and collective experience. The songs stir up different recollections and emotions in us, but the shared experience reminds us of roots and continuity, enabling us draw on the past as we move forward–sometimes reminiscing, always persevering.

When I die I wanna be sent back to try, try again / I’m not ready to let go of the pain, I’m not ready for heaven, so let me off of this train.

2 thoughts on “The Wood Brothers: One More Day”