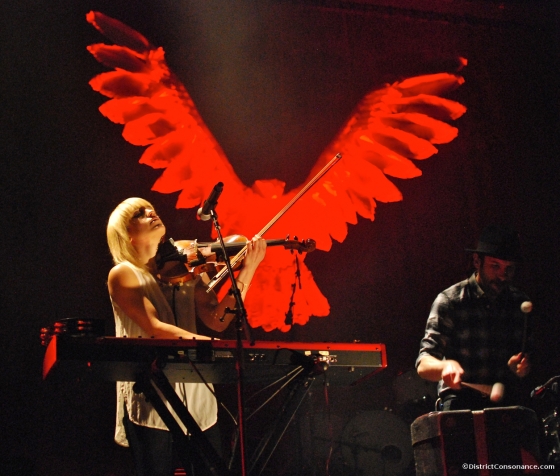 A Klee painting named Angelus Novus shows an angel looking as though he is about to move away from something he is fixedly contemplating. His eyes are staring, his mouth is open, his wings are spread. This is how one pictures the angel of history. His face is turned toward the past. Where we perceive a chain of events, he sees one single catastrophe which keeps piling wreckage upon wreckage and hurls it in front of his feet. The angel would like to stay, awaken the dead, and make whole what has been smashed. But a storm is blowing from Paradise; it has got caught in his wings with such violence that the angel can no longer close them. The storm irresistibly propels him into the future to which his back is turned, while the pile of debris before him grows skyward. This storm is what we call progress. –Walter Benjamin, “On the Concept of History” 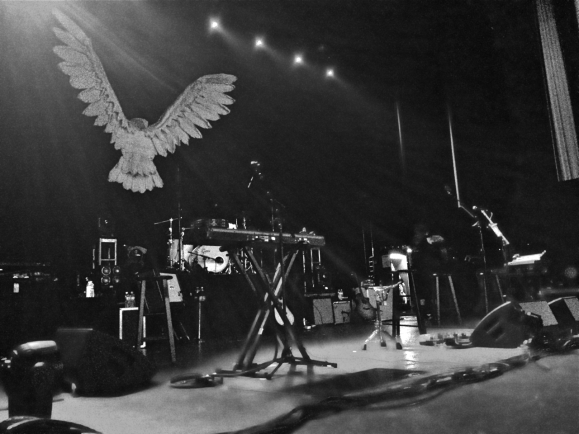 I’ve written before about TATE’s music — songs like “Sometime Around Midnight,” Mikel’s voice crackling in a fevered crescendo, plaintive strings carrying the narrative toward a moment of dissolution so visceral and so utterly relatable that it sends shivers down your spine because it seems as if all this time, a stranger has been watching, reading your thoughts.

I’ve shared these musings on particular TATE songs. But Thursday’s show and that sculptural bird (so evocative of Benjamin’s Angelus aphorism), its muted glow transformed into tones of red and blue during the evening, made something click for me. This is music that helps make whole what has been broken. Mikel Jollett and his band make poetry that we can dance to, and as long as we keep our feet moving, we’ll find our way out of the storm.

We are caught in a maelstrom of images and information. We sift through news about ISIS, Afghanistan, ebola there (and now here), children fleeing poverty and violence, voter disenfranchisement, melting polar ice, climate denial, truth denial — it never stops. We can swipe left to ignore the news alert on our smartphone, we can flip the channel on the idiot box, but the problems don’t disappear. It’s hard not to feel like things are falling apart, like the center really will not hold as our lives are increasingly reduced to bits of data, a tweet or a Snapchat image. Ephemeral, easily digested — and just as easily discarded.

In that chaotic swirl, we keep our feet on the ground by the grace of music that affirms our faith in some story that unites us. These are stories told through song that bear uncanny resemblances to our lives, lives with the pain of love lost, of betrayal. I could tell you that you’re all I’ve ever wanted, dear / I could utter every word you ever hoped to hear / I shudder when I think that I might not be here forever… (All I Ever Wanted). But in acknowledging these human frailties, Airborne Toxic Event’s music dares us to be open to the chance encounters that keep us going, even if — especially if — we are afraid: Afraid to love, afraid to lose / Afraid to start, afraid to choose / Afraid to live, Afraid to die (Letter to Georgia).

To me, that is the power of The Airborne Toxic Event: to remind us how to find ourselves, and in the process of healing ourselves, gain the strength to confront the rubble piled at our feet. 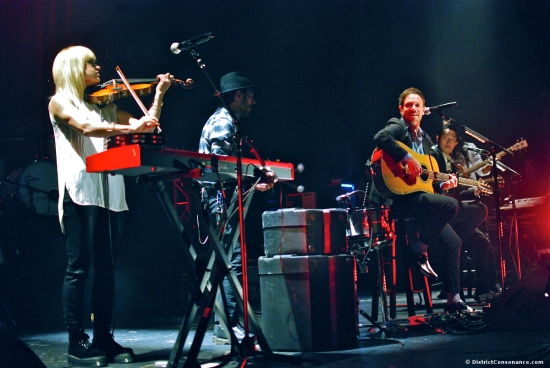 In support of my theory, I present two exhibits for your consideration.

Exhibit A. Before TATE took the stage at the Lincoln Theater, I chatted with fellow concertgoers. A few had traveled from California just to see their favorite band play. Yes, of course they saw TATE’s three-night residency at the Fillmore in San Francisco just a few weeks ago — but the band hasn’t played an acoustic show in years.

I then checked my Instagram feed. A soldier, home from a tour in Afghanistan, had commented  on one of Mikel Jollett’s photos. The soldier thanked the band’s frontman. Your songs helped with the stress, the homesickness, helped me more than you could ever imagine.

Exhibit B. A soul-baring post on the TATE fan blog This is Nowhere, in which the author relates how in the impenetrable darkness following the loss of her child, she heard a few minutes of “Sometime Around Midnight” — and while listening, a part of me resurfaced that I thought I’d never find again.

It doesn’t take much digging to find these and other stories. This band and this music give listeners the courage to share what otherwise would be Those soft little secrets / That you tell, that you tell / To yourself when you think / No one’s listening too well (Wishing Well).

The Airborne Toxic Event may not have set out to create a soundtrack for the climactic moment when a person clambers out of darkness and isolation, and yet through music, we find common ground and a safe haven: The truth is to me that I was caught in the storm / That I wasn’t alone (The Storm). 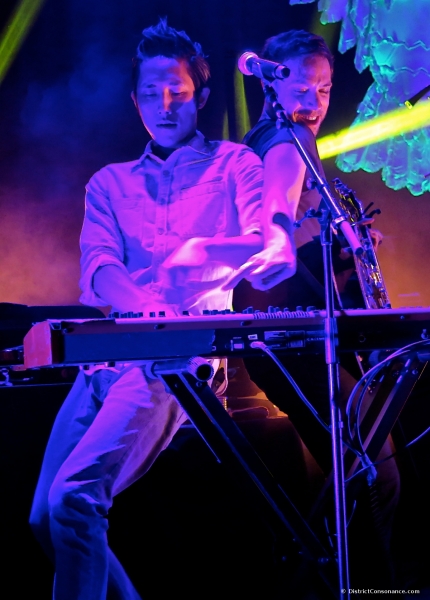 Caught in the storm, but not alone. We go to concerts as individuals but experience as a collective something transportive. Each show is unique and cannot be duplicated, and yet I am sorely tempted to make some sort of record of the experience if only to reassure myself that the sheer joy of hearing this band live was not just a dream. Though it cannot substitute for the event itself, I share here a few vignettes from the evening at the Lincoln Theater.

I’m camera shy — I’m much more comfortable behind the lens than in front of it. And so Thursday night found me behind the camera at the Lincoln Theater, photo pass in hand. I wasn’t expecting Mikel to enter from the back of the room, nimbly leaping onto chairs and shaking hands, all while delivering the tune “Something New.”

As the song progressed, Mikel moved steadily down the aisle toward the stage. When he was just a few rows away, I stepped out of the aisle, not wanting to impede his progress. But instead of proceeding directly onto the stage, he turns. Turns and makes eye contact and asks how I’m doing.

The simplest of questions, but I’m caught off guard. Out of the corner of the eye, I notice a member of the band’s tour crew — a hard-muscled fellow — staying within arm’s distance of Mikel, warily eyeing the crowd for any rabid fan who might tackle the lead singer. (Girl in dark dress, nervous smile, Nikon held loosely by her side — not a threat.)

Mikel bestowed a gentle smile and stepped onto the stage. 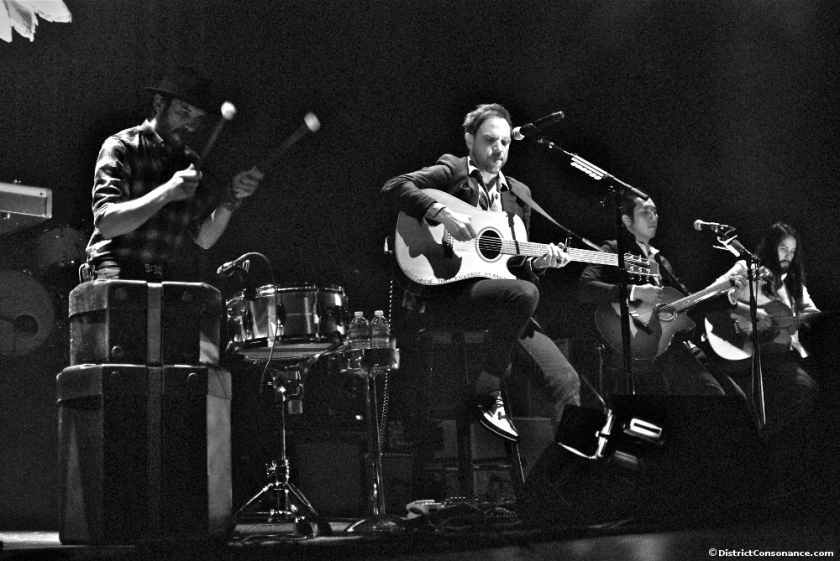 Concerts these days are experienced both in the moment and through a screen. At some point during each song, at least a dozen cell phones will be shoved up in the air, bursts of light flashing. But rather than condemn this, Mikel embraced it as part of the experience. It was a cyborgian cyclops moment during “The Book of Love” (a Magnetic Fields song) — man melds with machine, sees through the one-eyed machine. Mikel sat down at the end of the stage and plucked a compact GoPro camera out of a fan’s hands and lifted it to his eye, peering through it at the crowd, and then flipped it around to capture himself singing, smirking, leaning back to film his bandmates behind him. That lucky fan has a pretty great video now (if you read this, guy from California, will you share the video with us please?). 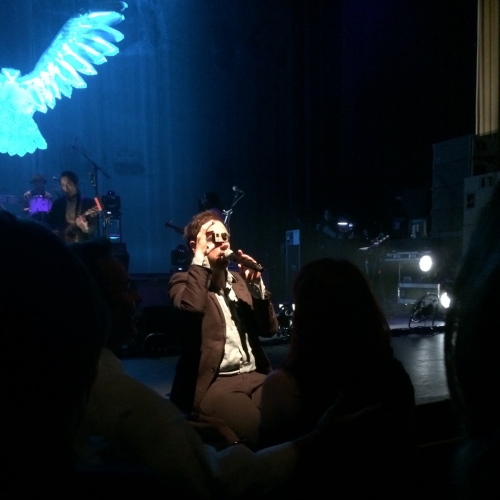 It was a moment of silliness, music, and joy.

It also called to mind the proliferation of articles bemoaning how cell phones have ruined concerts. Rudeness is not ok, of course.  Selfishness, also not ok. But I wonder if something else undergirds the compulsion to record the moment and to broadcast our presence in that moment.

Life, terrible and splendid, awaits outside those nightclub doors. Each day hurls more wreckage at our feet. The past recedes too quickly for us to make sense of it, much less mend it.

Perhaps we take concert photos because we’re trying to make the ephemeral seem less fleeting. Trying to find our footing on this ever-shifting earth. To affix part of this moment of beauty in our memories so that when we gather the strength to confront the crumbling facade, we have a blueprint for a sturdier edifice. A house in the storm. 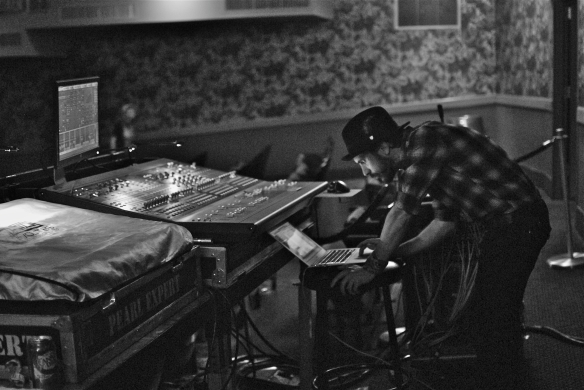 Daren Taylor works the sound board before the show. 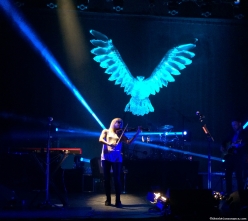 Anna in a crisscross of light. 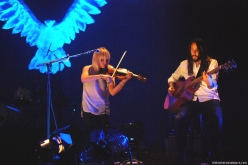 Anna and Adrian Rodriguez (bass) at the Lincoln Theater. 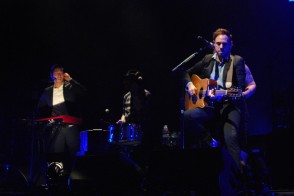 An acoustic evening at the Lincoln. 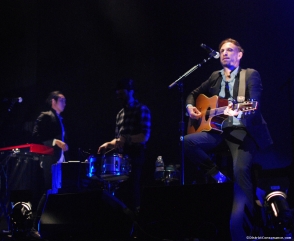 An acoustic evening at the Lincoln.

Daren Taylor forgoes the drum kit for some improvised percussion during a few acoustic songs at the Lincoln Theater. 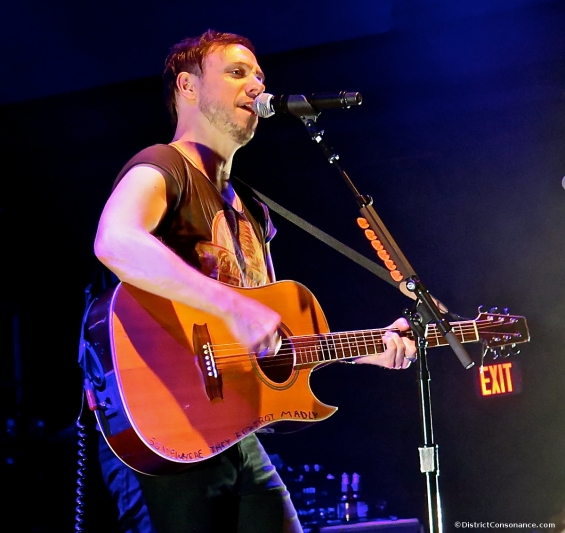 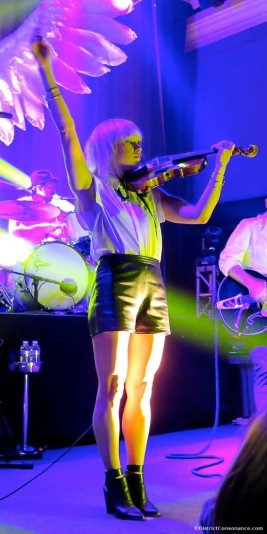 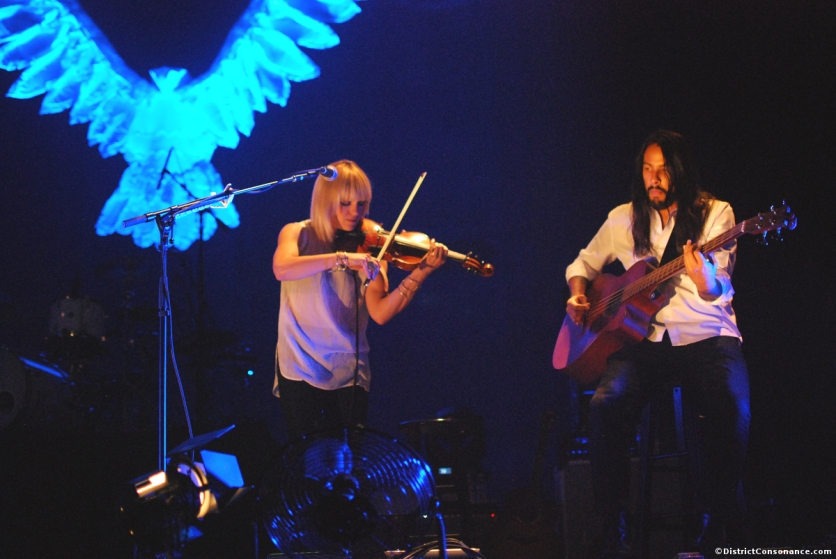 A big thank you to Pete and Bill for setting me up with a photo pass! Much, much appreciated. xoxo

3 thoughts on “A storm blowing from Paradise: A night with the Airborne Toxic Event”

Follow District Consonance on WordPress.com
© District Consonance, 2016. Unauthorized use or duplication of this material without express, written permission from this site’s author is strictly prohibited. Excerpts and links may be used, provided that full and clear credit is given, with appropriate and specific direction to the original content.
Loading Comments...
Comment
×
%d bloggers like this: