Days of rain. Not spring rain, the kind that nourishes new life, but late autumn rain. The kind that seeps into your bones and makes you weary, weary beyond your years, weary of waking up to headlines in which a city name is metonym for all that is fundamentally broken, weary of the emotional output demanded by the holidays, of tallying up mistakes and trying to outrun your own shadow.

The rain tapered to a drizzle mid-day and I laced up for a run. The Reflecting Pool was deserted, the Tidal Basin drew only a few brave tourists. I usually crave these moments of solitude, the grim satisfaction of pushing through the weariness. But that day, the wind whipping through the trees and the staccato of my shoes against wet gravel sounded more stark than soothing.

So I put on some music. Not my normal running playlist of pop and hip-hop, but the music of a singer-songwriter I started listening to a few weeks ago. His name is Jesse Terry. His music is filled with a simple grace, with lyrics that capture beautifully the eternal tug-of-war between head and heart. If you like Josh Ritter, Ryan Adams, or Jackson Browne, give Jesse’s music a try. His soothing voice paired with acoustic guitar is like a gentle sunbeam parting monochrome sky.

As I was looping behind the Jefferson Memorial, Jesse Terry’s “Second Dance” came on. The contemplative piano, the soothing swirl of strings, and above all, the ease and sweet wistfulness in his vocal style — it sounded like absolution.

“Second Dance” is as gentle and forgiving as an embrace, a promise of a slate wiped clean. Oh wouldn’t you, wouldn’t you move earth and stars / Leave your safe little prison and freshly cut yard / Just to remember the way that it feels when you’re truly alive?

I recently heard Jesse play at The Stone Room, my friend David’s house concert series in Falls Church, Virginia. (My first Stone Room show was Vandaveer’s superlative performance last spring.) The warmth that comes through in Jesse Terry’s songs is even more apparent when you see him perform live. Jesse sings with a smile and a joy so palpable that you can’t help but experience a shift in mood and an upturning of the corners of your mouth when you listen.

One of my favorites is “Feel That Way Again,” which Jesse introduced as the song of the traveling troubadour, about what it’s like to “go out on the road and not have an address” but “knowing that someone has your back in this world.”

Through the course of three albums, Jesse Terry intersperses midtempo toe-tappers with elegantly subdued ballads. Whether it’s the gritty “Devil Will Dance” (a song about the temptation of the wrong woman) or the sweet ache of “Grace On a Train” (about chance encounters that restore your faith in fate), the common thread is the unassuming, heartfelt nature of Jesse’s songwriting. These are universal messages delivered using simple turns of phrase and melodies that sweep his listeners from forlorn landscapes to sunnier vistas. Lately we’ve been reading the wrong signs /  Playin’ it safe, biding our time / Tryin’ to find gold in a coal mine /  When it’s nowhere to be found.

Jesse Terry just wrapped up a mini-tour with husband-wife duo Scot Sax and Suzie Brown. Each is a compelling singer-songwriter with strong solo albums, so when they combine forces — well, just wow. Spend one evening with Suzie and Scot and you’ll understand why we need music — the world spins crazily and we weave stories through song to hold it all together.

Scot’s smart and irreverent humor comes through in his wry lyrics and Suzie’s ease with both blues- and country-tinged styles enables her to deliver perfect doses of longing, sweetness, and sass. The musical alchemy of the duo produces a subtle magic that will ensnare you.

It’s probably cheating to fall back on the Johnny and June comparison, but there is something undeniably compelling about Scot and Suzie’s harmonies and their genre-spanning songs that draw from folk, blues, and rock. Scot grew up on a diet of Dylan, Bowie, Fleetwood Mac, and the Beatles, and Suzie cites Patty Griffin and Bonnie Raitt as influences. Scot’s songwriting accolades include that thing called the Grammy and Suzie worked with the incomparable Oliver Wood (of the Wood Brothers) in producing her sophomore album. (As a side note, Suzie is also a Harvard-trained cardiologist. The rest of us are underachievers.)

The evening’s sets included the insouciant, cheeky “Reflection in the Glass” (with a nod to Paul Simon) and “Sugar Blues” — an organ-and-vocal-harmony-driven song that is buoyant despite being steeped in the aftermath of a lover’s departure: Sweet sweet buttermilk & cream / You took the sweet from me / Now you’re gone like some old sweet song / Sung by bitter me.

Another favorite of mine is Scot’s “Istanbul,” an addictive, smoky little stunner that plays with words and with hopeful hearts: I would fly over Istanbul and two continents / For three little syllables and two consonants.

Touring is a family affair for all three of the musicians who performed at Stone Room that night. Jesse usually travels with his gal (Jess) and his border collie (Jax, after Jackson Browne). Suzie and Scot have a baby girl named Josephine, who was asleep in the next room during the show. In the alcove off the living room, there was just enough room for three guitar cases, some other musician miscellany, and a baby carrier/car seat. A baby monitor with audio and video feed sat on the shelf, enabling the parents to keep an eye on their little one. This was not the first time, and I hope it’s not the last, that I meet musicians traveling as a family. When it all comes down to it, what can be more heartwarming than seeing incredible artists passing along love for music to their kids, all while generously sharing their music with us?

The evening closed with Scot and Suzie joining Jesse for a rendition of Cash’s “Ring of Fire.” It was the perfect end to a perfect night.

I started this post describing my rainy day run, so I’ll share how that run ended. The drizzle finally gave way to stillness, and with a mix of Jesse, Scot, and Suzie’s music washing over me, I felt my heart unclench as my feet carried me onward. We ain’t coming back home tonight, gonna stay out late with our friends /  Wanna bet it all, make pretend /  That time ain’t closing in /  Wanna feel that way again. 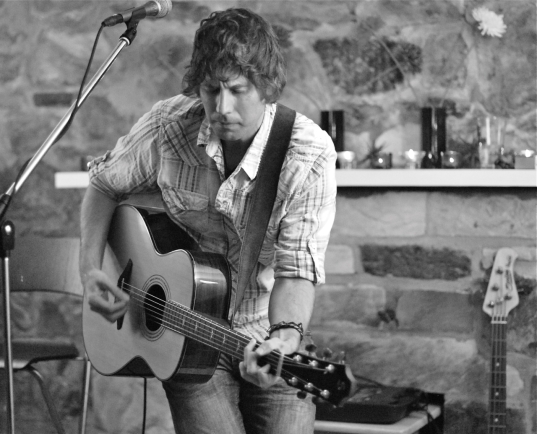 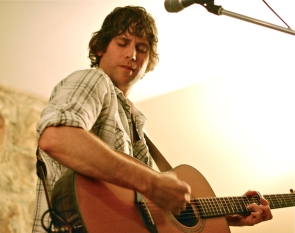 Scot’s guitar was found by a neighbor in a rubbish heap. It has no serial number or marking to give a hint as to its origin, but it sounds amazing.

Closing out the evening with a rendition of “Ring of Fire.”

Tuning and chatting before the show.

2 thoughts on “This Could Be Home: Jesse Terry + Suzie Brown & Scot Sax”